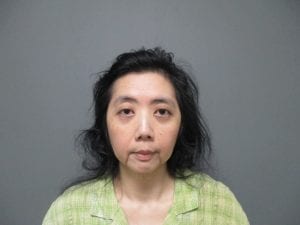 Hayashi’s bond has been set at $60,000, she remains in custody at the St. Clair County Jail.

Police allege Reena Hayashi concealed the death of her mother, Karen P Hayashi, 80 years of age, in their residence on Oxford Ave, for an extended period.  At this time, the cause of death has not been determined due to the decomposition of the body.  Although charges have been filed, detectives are still pursuing other leads in the case and awaiting the medical process for further information.

On Monday, July 12, 2021, at approximately 9:30 a.m., officers were requested to check on the welfare of an elderly female at a house in the 200 block of Oxford Avenue.  Officers responded and found the decomposing body of an elderly female in a bedroom of the home.  It is unknown how long the female has been deceased, but appears to have been for an extended period of time.

A relative living with the deceased is currently being held in custody while the investigation continues.  The cause of death was not immediately clear to detectives.  An autopsy will be scheduled.

Detectives are actively working the case; information will be released as it becomes available.