Inside the Fairview Heights Police Department 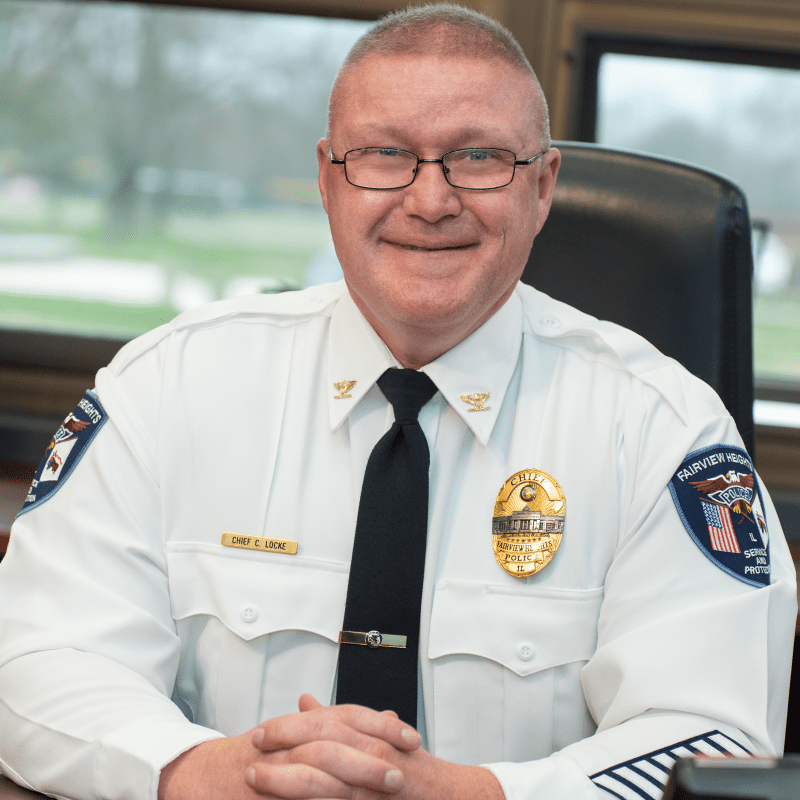 Chief Locke joined the police department in 1994 after spending eight years on active duty with the United States Air Force.

During his military duties, he was assigned to the 375th Security Police Squadron and the Air Force Office of Special Investigations, both units at Scott Air Force Base. Locke immediately went into the reserves upon his assignment to the FHPD. The Chief served as an AFOSI Special Agent until his retirement from the Reserves in 2014.  During his military career, he fulfilled many roles to include counter-intelligence agent, investigator, confidential informant handling agent, undercover agent, protective service team member and Emergency Services Team (EST) member. He is a veteran of Operation Iraqi Freedom.

Locke, upon joining the department in 1994, remained in patrol for approximately three years and was chosen for a position in the Criminal Investigations Division, where he remained for four years. During that time, he was an active member of the Major Case Squad of Greater St. Louis. Locke was promoted to Sergeant and became a shift commander, where he remained until 2007, at which time he was promoted to Lieutenant. Locke, as a Lieutenant, served as the commander of the Support, Investigations and Patrol Divisions. Locke has also served as a use of force instructor, Deputy Commander with the Major Case Squad and the city’s Emergency Services Disaster Agency Coordinator.

Locke has an A.A.S. degree in Criminal Justice from Belleville Area College (SWIC) and a B.S. degree in Liberal Studies with an emphasis in Criminal Justice and Sociology from Sterling College. He is a graduate of the United States Air Force, Office of Special Investigations, Special Investigators Academy.  Locke also completed the Administrative Officer’s Course and the Chief Executive Leadership Course, Southern Police Institute, University of Louisville.  He earned the Dean’s Scholar Award while attending the Administrative Officer’s Course in recognition of his academic achievements.  Locke has also instructed at the SWIC Police Academy and served as an adjunct professor for the college. 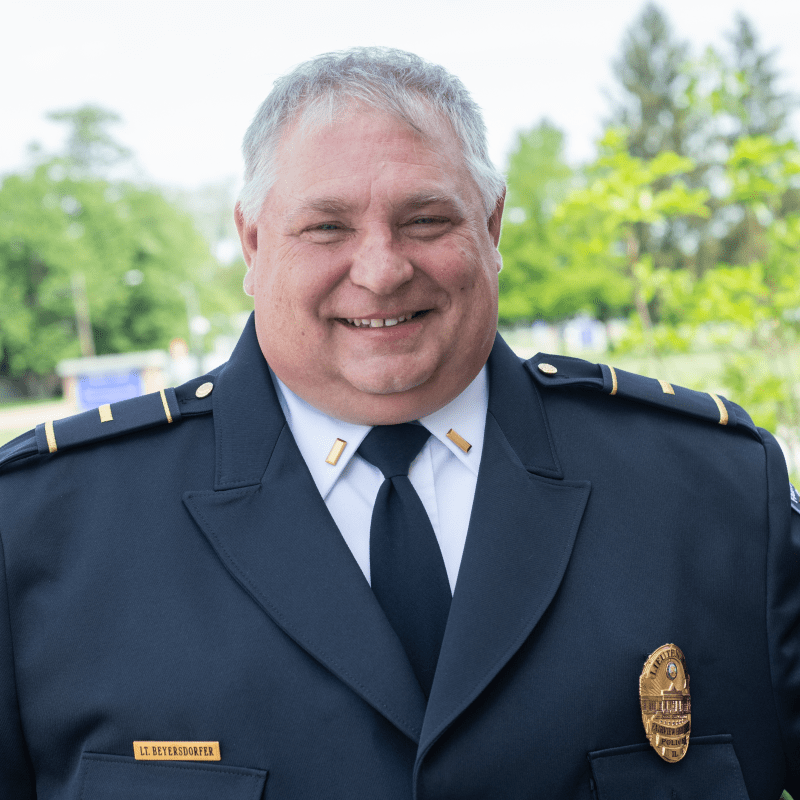 Captain CJ Beyersdorfer was born and raised in Fairview Heights. He started his Law Enforcement career in January of 1991 as a Juvenile Corrections Officer for St. Clair County.  In June of 1991, Captain Beyersdorfer became a member of the Fairview Heights Police Department as a Community Service Officer.  In January of 1994, he was hired as a Police Officer for the St. Louis Metropolitan Police Department.  While there, Captain Beyersdorfer was initially assigned to the North Patrol Division as a uniformed officer.  During his tenure there, he had a variety of assignments to different divisions, to include Asset Forfeiture, Homicide and Traffic before ultimately being assigned to the North Patrol Division as a Detective.

In September of 1998, Captain Beyersdorfer left the St. Louis Metropolitan Police Department and returned to the Fairview Heights Police Department as a Police Officer.  While in patrol, he had a variety of assignments and accomplishments, such as being a Field Training Officer/Coordinator, Department Armorer, Hotel/Motel Unit, and a Use of Force Instructor.  He received several awards while in patrol, to include the Life Saving Award, Officer of the year (1999), Community Service Award, and the ACE Award (five times).  In November of 2007, Captain Beyersdorfer was promoted to Sergeant.  He was assigned a patrol shift where he served until 2010 when he was assigned as a Sergeant to the Criminal Investigations Division.  In December of 2013, Captain Beyersdorfer was promoted to Lieutenant.  During his tenure as a Lieutenant, he was assigned to every Division- Patrol, Support Commander and the Administrative Lieutenant.

In July of 2019, Captain CJ Beyersdorfer was promoted to Deputy Chief (Captain) 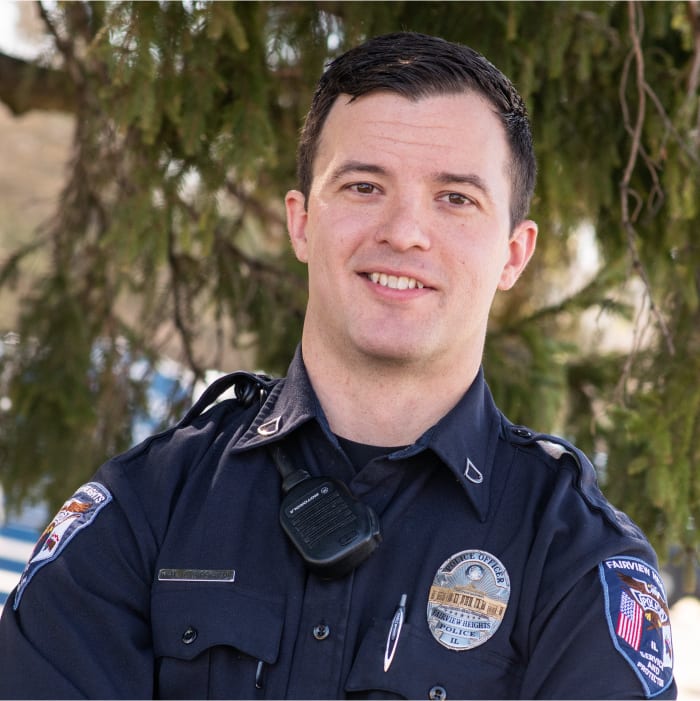 The core mission of the Fairview Heights Police Department is carried out by our Patrol Division officers. Every other division and unit in the Police Department, including the Chief of Police and administrators, are there to support what Patrol does day in and day out.

Patrol officers are counted on by this community to:

· Respond to emergency calls for help;

· Act as keepers of the peace;

· Investigate and report on crimes and incidents;

· Patrol neighborhoods and businesses to prevent and detect crime.

The Patrol Division is made up of 28 officers, divided into 4 teams. Each team is led by a patrol sergeant. The teams work 12-hour shifts.  Each team is assigned to work together on the same shift for a full year.

Patrol officers work a variation of days and nights, with the main hours starting at 6 a.m. or 6 p.m.  On the day shift, the team consists of the sergeant and six officers. On the night shift, the teams are made up of a sergeant and five officers.  The city is split into four districts; district one  encompasses the area from Old Collinsville Road to Rt 159.  The Mall and surrounding property is its own business district with one officer assigned on a daily basis.  District two runs from Rt 159 to Union Hill Road, and district 3 the remaining area of the city to the west.  Officers are assigned calls by district with roam cars to fill in while district cars are busy.  Officers work as a cohesive unit to provide safety to each other and to our citizens and visitors.  Officers rotate districts every two weeks, so that officers are familiar with each area of the city.

The Fairview Heights Police Department’s Criminal Investigations Division supports the other divisions of the department by conducting follow-up investigations of reported criminal activity and if warranted presenting cases to the St. Clair County States Attorney’s office for prosecution. Detectives review preliminary investigations conducted by patrol officers and then interview victims, witnesses, and suspects. Personnel assigned to the unit possess special knowledge and skills in interviewing, crime scene processing, interpersonal communication, and constitutional issues such as search and seizure. Detectives within the division are members of the Major Case Squad of Greater St. Louis and the Child Death Investigations Task Force.

The division is comprised of a Division Commander, Detective Sergeant, and eight sworn officers. Four of the officers serve as detectives investigating general criminal activity that has occurred within the city of Fairview Heights. One officer serves as the juvenile detective primarily investigating crimes and civil matters involving persons under the age of eighteen.  Three officers are on special assignment with outside law enforcement agencies. One officer is assigned to the Metropolitan Enforcement Group of Southwestern Illinois, which investigates street-level drug crimes that occur within a multi-county area. Another officer is assigned to the Drug Enforcement Administration (DEA) task force.  This task force investigates drug offenses that are of a larger scale and fall under federal jurisdiction.  The department also belongs to the Metro East Auto Theft Task Force, which primarily investigates auto theft within St. Clair and Monroe Counties.  The task force is staffed by officers from ten agencies. 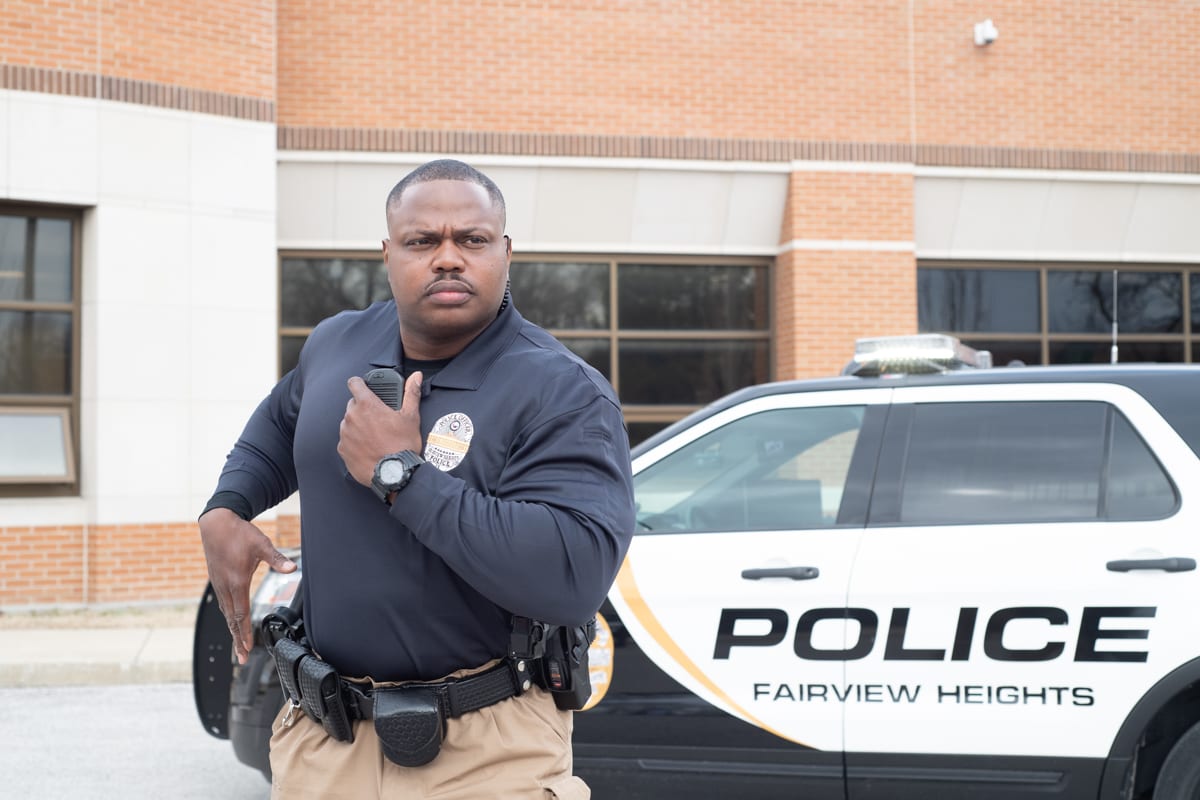 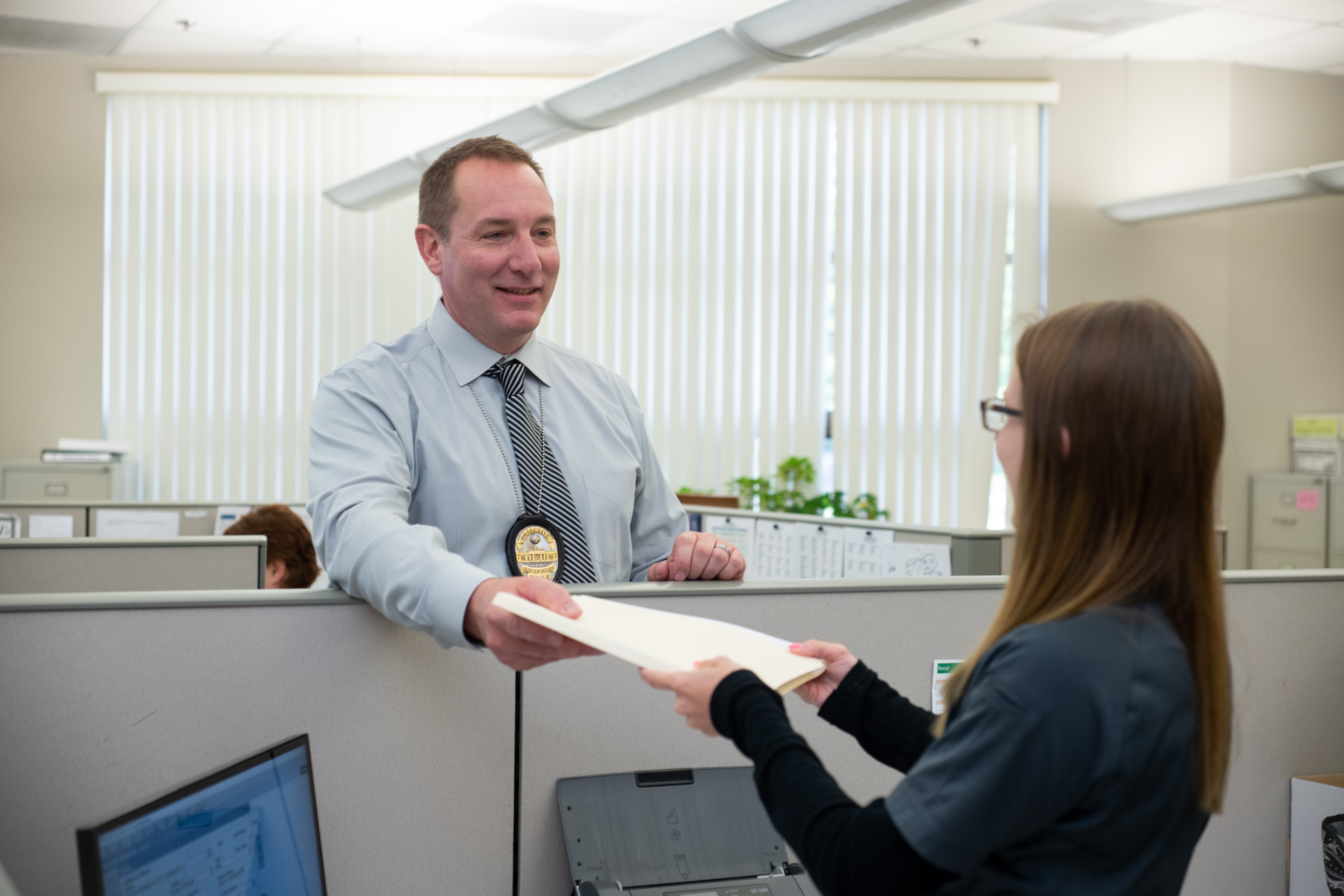 Records Department, staffed by two civilian employees, is responsible for the overall processing, maintenance and digitizing of department records and reports. This includes all reports pertaining to crimes, accidents, arrest records, traffic citations and warning tickets. The Records Department is responsible for the preparation of the monthly Illinois Uniform Crime Report. They provide assistance to citizens and law enforcement agencies as necessary.

Former Chief of Police Edward Delmore called upon an old friend, Darrin DeCoster, of the Fairfax County Va. Police Department to help the unit during its formation. DeCoster was a member of the Army Old Guard and also served as a sentinel at the Tomb of the Unknown Soldier. DeCoster instructed the unit on drill moves, hand movement, flag etiquette, rifle and flag presentations, and posture.

Before the first week of instruction was over, Former Chief Delmore arranged for the Honor Guard to present the colors during the National Anthem for the 2008 St. Louis Cardinal’s opening game. Since that time, the Honor Guard has been requested to present the colors at several events including SWIC Police Academy graduations, the FHPD senior and youth academies, the St. Louis Blues Hockey Team Heroes night, Grace Church Memorial Day celebration, the Guns & Hoses Police vs. Firemen boxing match, the Southern Illinois Police Chief Association & Southern Illinois Law Enforcement Commission annual training seminar. They have participated in the St. Clair County Sheriff’s Memorial and Law Enforcement Officers Memorial in Springfield, Illinois, along with a number of fallen police officer funerals. 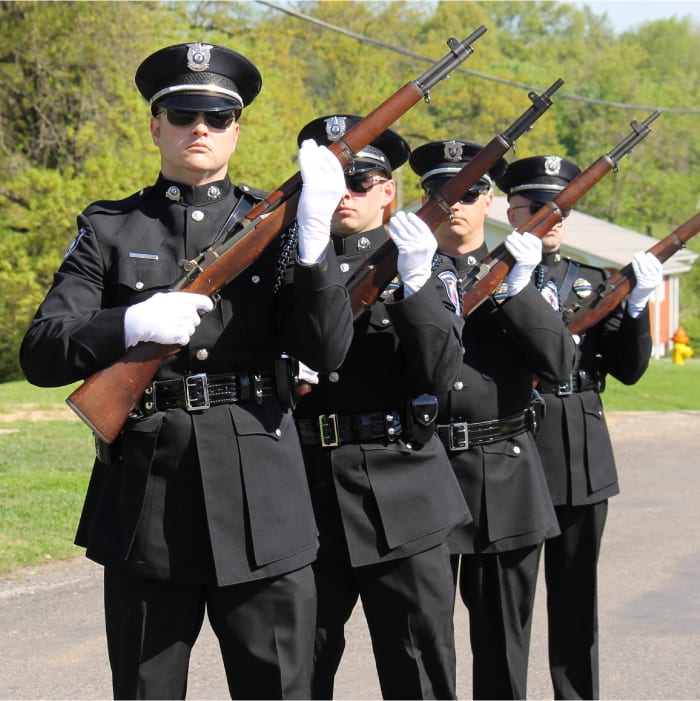