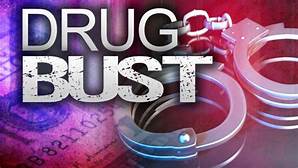 On Wednesday, April 15, 2020, at approximately, 11:40 a.m., officers were alerted to the Fresh Thyme parking lot, 6569 North Illinois, to investigate suspicious behavior; an anonymous caller reported what was believed to be a drug transaction.

When officers arrived, two Belleville men in their mid-20’s were found sitting in a black sedan with a large bag of cannabis sitting on the center console.  A probable cause search yielded over 500 grams of cannabis product, a loaded handgun, and several other items used to distribute cannabis.  A check of the serial number on the firearm showed that it had been entered stolen by the Smithton (IL) Police Department.

At the conclusion of the investigation, the passenger was released; however, the driver of the vehicle was turned over to the Illinois State Police, drug task force for further investigation.

The name of the suspect has not been released, pending formal charges.