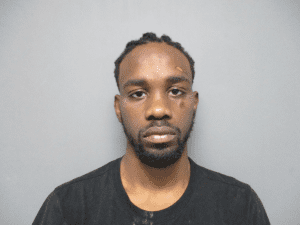 On Thursday, December 12, 2019, at approximately 10:45 a.m., a Fairview Heights patrol officer was on mobile patrol at the St. Clair Square Mall when he observed a vehicle parked next to the sidewalk outside of Dillard’s with its hazard lights activated. The officer checked the Missouri license plates attached to the vehicle to find the car was reported stolen on December 9, 2019, from St. Genevieve County, Missouri. At the time, the vehicle was unoccupied.
Moments later, a male approached the car from inside the mall and attempted to get inside. The officer ordered him to stop several times, but the male continued to try to get away. The officer tried to apprehend the suspect when the male started the vehicle and drove away while dragging the officer, who was partially inside the vehicle. The suspect continued a short distance before crashing into a J.C. Penney exterior wall, injuring the officer and a bystander, who was struck by the moving vehicle.
The male ran back into the mall, where he was later taken into custody by responding officers. The suspect is described as a 20-year-old, St. Louis, Missouri man, who also has an active warrant for auto theft in St. Louis County.
The bystander received minor injuries that did not require medical attention. However, the officer, who is 30 years-of-age with four years’ experience with the department, was transported to a hospital with non-life-threatening injuries.
During a search of the stolen vehicle, a handgun was also located as well as the keys to the vehicle.
More information will be released as it is received.