On Wednesday, October 28, 2020, at approximately 10:45 p.m., officers responded to a residence on Cedar Drive to investigate a burglary.  When they arrived, the female victim reported that she believed her ex-boyfriend broke into her home, destroyed numerous items, sprayed pepper spray throughout the house, and stole some laptops.  He also poured liquids like milk on the counters and floors, even knocking holes in the walls.

While officers were investigating, the suspect texted the victim with death threats and implicating himself in the burglary and destruction of her property.  The suspect also called the victim while officers were present, who overheard his threats and confession to the victim that he had committed the burglary, which was also a violation of an order of protection, which was served to the suspect two to three weeks prior to this incident.

On October 29, 2020, the Criminal Investigations Unit sought charges against the suspect, identified as: 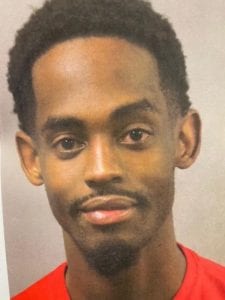 He was officially charged with the following felonies:

Johnson was apprehended this morning by the U.S. Marshal Service in St. Louis, where he is being held on a $100,000 bond and awaiting extradition back to Illinois.