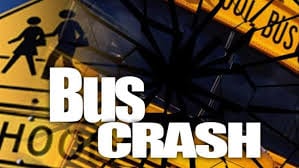 On Friday, January 29, 2021, at approximately 7 a.m., the Fairview Heights Police responded to investigate a school bus crash in the 9100 block of Bunkum Road.

Officers arrived to find a full-sized Dodge Ram van, operated by Stephen R Brown, 29 years of age, Fairview Heights, had struck the rear of the school bus.  The  bus had been stopped at that location with the stop arm out and lights flashing while picking up a student to drop off at Grant School.

From the crash, Brown was left trapped inside the van; Fairview and French Village Fire responded to extricate him from the vehicle.  Brown suffered serious, although non-life-threatening injuries, and was transported to an area hospital for treatment.  The school bus driver, Robert A Fowler, 31 years of age, Fairview Heights, was also transported to an area hospital for minor injuries.  None of the children on the bus were injured during the collision.

Police are unsure what caused Brown’s vehicle to collide with the bus, he was issued a citation for failing to reduce speed to avoid an accident.