Update-On Monday, September 16, 2019, during the early morning hours, the Fairmont City Police were alerted to suspicious activity in one of their neighborhoods.  Their officers were able to locate the stolen vehicle from Fairview Heights and take several suspects into custody, who had occupied the stolen SUV.  The occupants of the vehicle were two adult females, two adult males, and one juvenile female.  The adults were detained at the St. Clair County Jail, while the juvenile was turned over to her guardian.  Fairview Heights detectives were able to identify one of the four adults as a suspect in the original theft of the SUV from the Ashland Meadows neighborhood on September 13th. 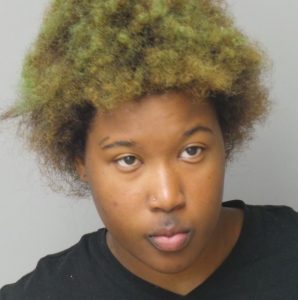 with burglary and unlawful possession of a stolen motor vehicle.  Graham is currently being held at the St. Clair County Jail on a $35,000 bond.

This case is still under investigation, anyone with information is urged to contact the Fairview Heights Police Department.

On Friday, September 13, 2019 at approximately 5:45 am, officers responded to the Ashland Meadows subdivision near Ashland Avenue and Old Collinsville Road to investigate several burglaries to motor vehicles, which subsequently led to the theft of a motor vehicle.

When officers arrived, they found that several unlocked vehicles had been entered, with one of the vehicles having the keys inside.  The keys belonged to a black, Ford Edge SUV, IL registration S751019, which was found to be stolen from the driveway.  A neighborhood camera captured the four suspects on video and police are now asking the public’s help in identifying each of them.  They are described as three black females and one black male.  Police also ask for help in locating the stolen Ford Edge, if located call 9-1-1 to provide a location.

Anyone with information is urged to contact Detective Rutter at (618) 489-2132, you can also contact the FHPD through our website, fhpd.org or leave an anonymous tip through CrimeStoppers, tips@stlrcs.org.

The attached video will show all four suspects along with the stolen black SUV leaving the neighborhood.