Fight at the MetroLink Results in Gunshot 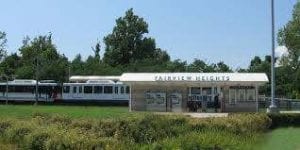 On Sunday, August 23rd, 2020, at approximately 8:20 p.m., officers responded to the MetroLink Station parking lot on St Clair Avenue in Fairview Heights for a fight in progress.

Officers arrived to find one of the participants, a 28-year old male, who is homeless, had been shot in the forearm and was later transported to a St. Louis area hospital for non-life-threatening injuries.

Witnesses at the scene reported that this male was alone when the fight started, while three other men described as teens were standing together at the bus stop near the platform.  The adult male was said to be pacing, carrying a pipe, and in an agitated state of mind.  A fight between the teens and the adult male broke out, which resulted in one gunshot being fired, striking the adult male in the arm.  The teens ran west from the scene and have not been located.

It is unclear who was originally in possession of the firearm since the gunshot occurred while the four participants were actively fighting.

As the investigation continues, police ask for anyone with additional information to contact the FHPD by calling (618) 489-2100, or by sending a message through our Facebook page or website, https://fhpd.org.

No other injuries were reported during the incident.