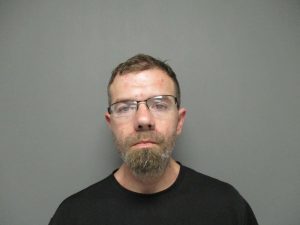 On Tuesday, July 5th, 2022 at approximately 11:30 p.m., officers responded to the 1600 block of Sycamore, to investigate a home invasion, which had just occurred.  When officers arrived, the suspect was no longer on scene.

Officers later learned the neighbor, Michael A Slusser, 36 years of age, also of the 1600 block of Sycamore, had used an axe to breach the victim’s front door yelling at the occupants of the home.  Slusser then walked out to two vehicles on the same property and began breaking the windows with the axe.  Officers were able to watch the incident on the victim’s home surveillance equipment to positively identify the suspect, Slusser.

Officers searched the area, including an attempt to apprehend Slusser at his home, but were unable to locate him.

Meanwhile, the case was presented to the St. Clair County State Attorney, who later issued the following felony charges for Slusser:

After Slusser would no longer communicate with officers and would not surrender, it was decided to contact the U.S. Marshal’s Fugitive Task Force for assistance in breaching the home and taking Slusser into custody.  He was found in the basement of the home where he was placed under arrest.

There were no injuries reported throughout the initial incident and into the apprehension of Slusser.  Slusser will remain in police custody in lieu of posting bond.

The Fairview Heights Police would like to thank the U.S. Marshal Fugitive Task Force and the Illinois State Police for their assistance in resolving the situation peacefully.