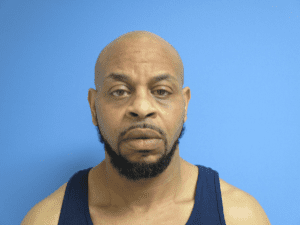 On Sunday, February 27, 2022 at approximately 2:00 a.m., the Fairview Heights Police Department received a 9-1-1 call from a female reporting she was being held at gunpoint in a vehicle at Circle K, 10070 Bunkum Road.  The female disconnected as her captor returned from buying something inside the store.  When police arrived a few seconds later, they found the suspect and victim sitting in the suspect’s vehicle on the parking lot.  When police approached, the truck took off and disregarded police attempts to stop him.  Police pursued the truck at a high rate of speed into Swansea, then into Belleville.  The truck drove in excess of 100 mph and into oncoming traffic during the pursuit.  The suspect finally stopped, which allowed the victim to escape, where she was rescued by pursuing officers.  The suspect also ran on foot into a wooded area near Rt 161 and Frank Scott Parkway. Realizing he could not escape the large police presence, he surrendered and was taken into custody without a struggle.

Police later learned the suspect was a former boyfriend of the victim and that he had first contacted her at her residence in East St. Louis.  When the victim walked from her apartment, he was there pointing a handgun at her, threatening to shoot her if she did not go with him.  The victim was held at gunpoint by her abductor in his vehicle and at his residence on Potomac Drive, Fairview Heights for approximately four hours before she was able to phone police.  Police also learned that the victim wrestled the gun away from the suspect during the pursuit, which caused the suspect to travel into oncoming traffic where he subsequently stopped on the shoulder of the roadway.  Police were able to recover the handgun on the pursuit route.

On Monday, February 28th, the case was delivered to the St. Clair County State Attorney for their consideration of charges.  The suspect, Steven L McCoy, 43, Potomac Drive, Fairview Heights, was charged with the following felony counts: