On Monday, March 2nd, 2020, a Fairview Heights patrol officer approached a male who was acting suspiciously near the entrance of Total Wine & More, 5905 North Illinois.  The officer had seen the male several times throughout the morning walking on Joseph Drive or Longacre Drive, each time the officer past, the male would cover his face with his hoodie so that only his eyes would be visible.  After observing this behavior several times, the officer approached the male.

During the interaction, the male was evasive and kept turning away to hide a portion of his body.  The officer, knowing this behavior to be more than suspicious, began to pat down the male for weapons; the male resisted and was secured in handcuffs.  The male had to be wrestled to the ground where a firearm was recovered from one of his pockets with over 20 bullets.  Upon further inspection, officers found that the serial number on the gun had been scratched off to hide its identity.  It was later determined that the weapon had been reported stolen out of St. Louis County in 2018. 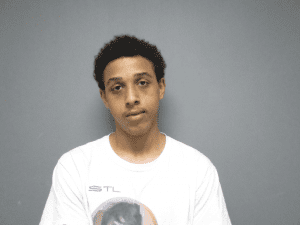 Hill does not possess a valid FOID card or concealed carry permit in any state.