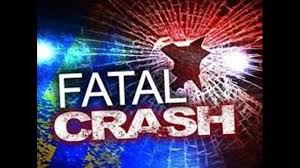 On Saturday, March 7th, 2020, at approximately 10:45 p.m., officers responded to a two-vehicle crash on Lincoln Trail at Commerce Lane.

When officers arrived just after the crash, they located a severely damaged, black Mercedes passenger car resting on its side against a utility pole.  Officers rendered aid to the critically injured driver of the Mercedes; however, he died at the scene.

The driver has been identified as Dalano B Smith, 39 years of age, from Cahokia.

Preliminary details showed that Smith’s vehicle was traveling eastbound on Lincoln Trail at a high rate of speed.  When the vehicle approached the intersection at Commerce Lane, a Chevrolet Silverado truck was stopped for a red traffic signal in the same lane Smith was traveling.  Smith’s vehicle struck the rear of the Silverado; after impact, Smith’s vehicle continued eastbound, striking a utility pole.

The Metro-East Crash Assistance Team responded to investigate the fatal crash.  Smith was the sole occupant in his vehicle; the driver and passenger of the Silverado were not injured.  The investigation continues; it is unknown if drugs or alcohol played any role in the crash.