On Thursday, April 7th, 2022 at approximately 7:10 pm, a uniformed Fairview Heights Police Officer was patrolling inside of the St. Clair Square Mall.  The officer was contacted by employees and told that two subjects had just stolen items from their store.  The officer was given a brief description of the suspects and the direction they had ran inside of the mall.

Moments later, the officer observed two people who matched the description provided by the employees.  The two people stepped inside of a vacant store and the officer followed them.  Once the officer entered the store, the officer encountered a third subject near the back of the store.  That subject was later identified as DWIGHT L HOUSTON, a 29 year old male from St. Ann, MO.

The officer inquired as to who the subjects were and none were compliant, refusing to give their names to the officer.  Houston then shoved the officer in the chest and ran past her into the mall.  The officer gave chase on foot and ordered Houston to stop.  Houston did not comply with these commands, as a result the officer deployed her Taser.  Houston fell to the ground and was secured into handcuffs by other responding officers.  The officer was not injured; Houston suffered only a small puncture wound to his arm where the Taser probe struck him.

On Friday, April 8th, 2022, the FHPD presented the case to the St. Clair County State’s Attorney for warrant application.  Houston was charged with the following offenses:

Aggravated Battery to a Peace Officer (a Class 2 felony)

Resisting Arrest (a class A misdemeanor)

Obstructing a Peace Officer (a class A misdemeanor)

The Honorable Judge Haida issued the warrant assigning a $50,000.00 bond.

Houston works inside of the mall as a costumed character, however he was not in costume at the time of the incident and this information was not known to the officer on scene.  The theft suspects were not located. 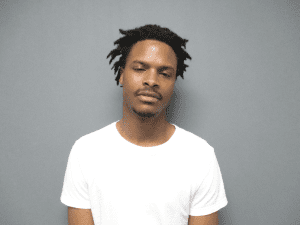