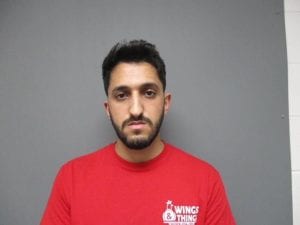 On Tuesday, March 23rd, 2021, a 15-year-old female, accompanied by her parents, reported that while she was working at Wings and Things Restaurant, 5201 N. Illinois Street, Fairview Heights, one of her bosses began to touch her inappropriately.  The first instance was reported to have happened in December of 2020.

After learning of the sexual abuse, the FHPD began to investigate the incident and fully identified the suspect in the case to be 27-year-old, Hamza Alammouri, Debra Drive, Fairview Heights.  After obtaining enough evidence, the FHPD served a search warrant at the restaurant on March 30, 2021.  At the same time, Alammouri was located at the restaurant’s second location in O’Fallon, IL, where detectives from the FHPD, assisted by the O’Fallon Police Department took Alammouri into custody.

Today, Alammouri was charged with three felony counts, which includes:

Alammouri’s is currently being held at the St Clair County Jail on a $75,000 bond.