On 12/21/2021 at approximately 4 p.m., officers responded to Hobby Lobby, 6549 North Illinois to investigate an armed robbery that had just occurred on the parking lot.  When officers arrived, it was learned that a male suspect had approached a male putting packages into his vehicle; the gunman showed the victim a handgun from inside his hoodie pocket and threatened to kill him if he did not give him all of his cash.  The victim complied with the suspect’s order and handed over the cash he had in his wallet.  The suspect walked from the scene and out of sight to the northern part of the parking lot.  At that point, police were confident the suspect entered and left the area in a vehicle not on foot.  After a review of the surveillance cameras in the area, the make and model of the vehicle used by the suspect was identified.

Police were able to develop a suspect from the vehicle information.  Once the suspect was identified, police were able to take him into custody with the help of the Illinois Department of Corrections-Parole Division. 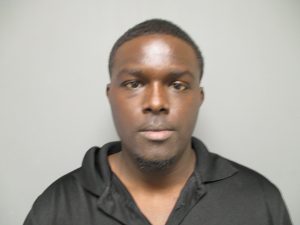 No injuries were reported during the incident.